To share your memory on the wall of Aaron Thiel, sign in using one of the following options:

Provide comfort for the family of Aaron Thiel with a meaningful gesture of sympathy.

Beloved son of Richard and Marlaina Thiel, Aaron was born in Salem, Oregon on August 10, 1983. While in high school Aaron signed... Read More
Aaron Kristoffer Thiel, 35, of Ronan, MT went to be with our Lord on March 23, 2019 at St. Patrick Hospital.

Beloved son of Richard and Marlaina Thiel, Aaron was born in Salem, Oregon on August 10, 1983. While in high school Aaron signed up for the delayed military enlistment program and upon graduation from Stevensville High School in 2002 he left for boot camp at Fort Knox, KY to become a Cavalry Scout, serving his first tour in Iraq.

Following his discharge he joined the National Guard and spent a year in New Orleans helping with the clean-up following hurricane Katrina. Aaron was then called up for his second tour in Iraq as a part of the 82’nd Airborne. Aaron was awarded the Purple Heart during this second tour. The American Legion has placed his name on the Veteran’s Memorial Park Wall in Stevensville.

Aaron had a deep love for his family, friends and animals.

A Celebration of Aaron’s life will be held on Saturday, March 23, 2019 at 5:00 pm at Jesus Community Church, 318 College Street in Stevensville, followed by a potluck dinner. Condolences can be left for Aaron’s family at www.gardencityfh.com.
Read Less

To send flowers to the family or plant a tree in memory of Aaron K. Thiel, please visit our Heartfelt Sympathies Store.

Receive notifications about information and event scheduling for Aaron

We encourage you to share your most beloved memories of Aaron here, so that the family and other loved ones can always see it. You can upload cherished photographs, or share your favorite stories, and can even comment on those shared by others.

Posted Mar 27, 2019 at 04:10pm
My heartfelt condolences to Aaron's family in your time of loss. Aaron was a brilliant individual and I enjoyed his stories he shared with me, his dreams and aspirations, as well as his creative tangents. Wherever he is traveling now, he will surely enlighten those he encounters. May he truly rest in the peace he deserved, and thank you for raising a son who served our country.
Respectfully,
Linda Pete
Salish Kootenai College
Comment Share
Share via: 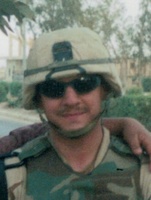