To share your memory on the wall of Dennis Pleasant, sign in using one of the following options:

Provide comfort for the family of Dennis Pleasant with a meaningful gesture of sympathy.

Lefty started life as the second son of Dennis F. And Carrie L. Pleasant in July 5th, 1928. Christened Dennis Eugene Pleasant, Lefty found a love for baseball. And soon enough, Dennis, Denny, and the hated “Gene”, were cast off of his life, to be immortalized as the Bonner Lumberjacks’ southpaw pitcher, Lefty. On the corner of what is now South Avenue and Higgins Avenue, green-painted bleachers stood at the baseball field that is now the University Of Montana Soccer Field, Lefty and his mother watched baseball’s greatest pitcher, Satchel Paige while Mister Paige was on exhibition. Lefty took his pitching skills with him as he served our country during the Korean conflict, and even earned a try-out with the Saint Louis Cardinals. Lefty concluded his baseball career with its greatest challenge as the coach to the Hellgate Lions Little League team.

In 1949, before he was called into service, he started work at the Anaconda Mill in Bonner. He worked on the green chain, pulling green boards into separate bins. In July, 1950, our father received his draft notice in response to the war in Korea. In the United States Army, our father saluted General Mark Clark as the famed General passed in review, then together all of them witnessed a test firing of the atomic bomb. Lefty watched three separate shots in the desert, earning him membership in the atomic veteran community.He returned to the mill after his service, and worked his way up to becoming lumber shipping supervisor. In 1972, Anaconda sold the mill to Champion International’s U. S. Plywood division, and Lefty was a Champion man until 1980. After that, his work career took him to the office of Chris Crawford Insurance, where his popularity in Missoula brought the company a lot of business. His final, and most rewarding job was as that of the well-known greeter at Walmart. So many still comment on his affability, friendliness, and helpfulness. And only in his late eighties did he finally hang up his work clothes for a life in retirement.

Right after his return from serving our country, he met our future mother, Barbara Jean Zillah, a 19 year old nursing student. Together they built a life as Mister and Misses Dennis and Barbara Pleasant. Their first two son, Richard and Dave, joined them, then they built their house between Piltzville and Turah. Lefty worked hard to provide for his new family, showing himself a fine worker and conscientious provider. For a housewarming gift, the Divine blessed them with a third son, T. William Pleasant. Eventually, Lefty’s mother Carrie would join them, living in a blue and white trailer in the backyard. And Scotty the Skye terrier joined the family in 1970, as well the Fin Fin Dynasty, pharaohs of the goldfish bowl.

Lefty was preceded in death by his father, in 1959, his mother in 1986, his older brother Bill Pleasant, who in his own right, made it into his nineties. Lefty was also preceded by a huge host of friends from all over Montana, from work, and the various social outlets he he attended. His father had be a Grand Exalted Ruler of Elks Lodge 383, and Lefty joined the herd. Many weekend nights were spent at the Elks Club, where Barbra and lefty would dance the night away.

Lefty is survived by the mother of his children, Barbra Z. Pleasant-Powers, of Fort Charlotte, Florida, their three sons, Richard, of Clarksville, Tennessee, Dave (Kathy), of Piltzville, and T. William, of Missoula. Lefty leaves behind grandkids Erik and Mallory, and Collin and Paige. Lefty is also equally survived by that multitude of friends and admirers from across Lefty’s beloved Montana.
Read Less

To send flowers to the family or plant a tree in memory of Dennis "Lefty" Pleasant, please visit our Heartfelt Sympathies Store.

Receive notifications about information and event scheduling for Dennis

We encourage you to share your most beloved memories of Dennis here, so that the family and other loved ones can always see it. You can upload cherished photographs, or share your favorite stories, and can even comment on those shared by others. 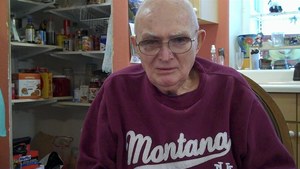